In last week’s blog Four Seasons for Brain Research RIDT CEO Wilfred Kenely speaks about the relationship between art and fundraising for research. This week we feature internationally acclaimed violinist Carmine Lauri who will be the soloist for this concert to be held on Sunday 27th March.  Carmine Lauri’s name is synonymous with the violin, but in this interview with Alex Vella Gregory we discover there’s also reel tape and wooden spoons! (Article feature in the Sunday Circle, February 2016) 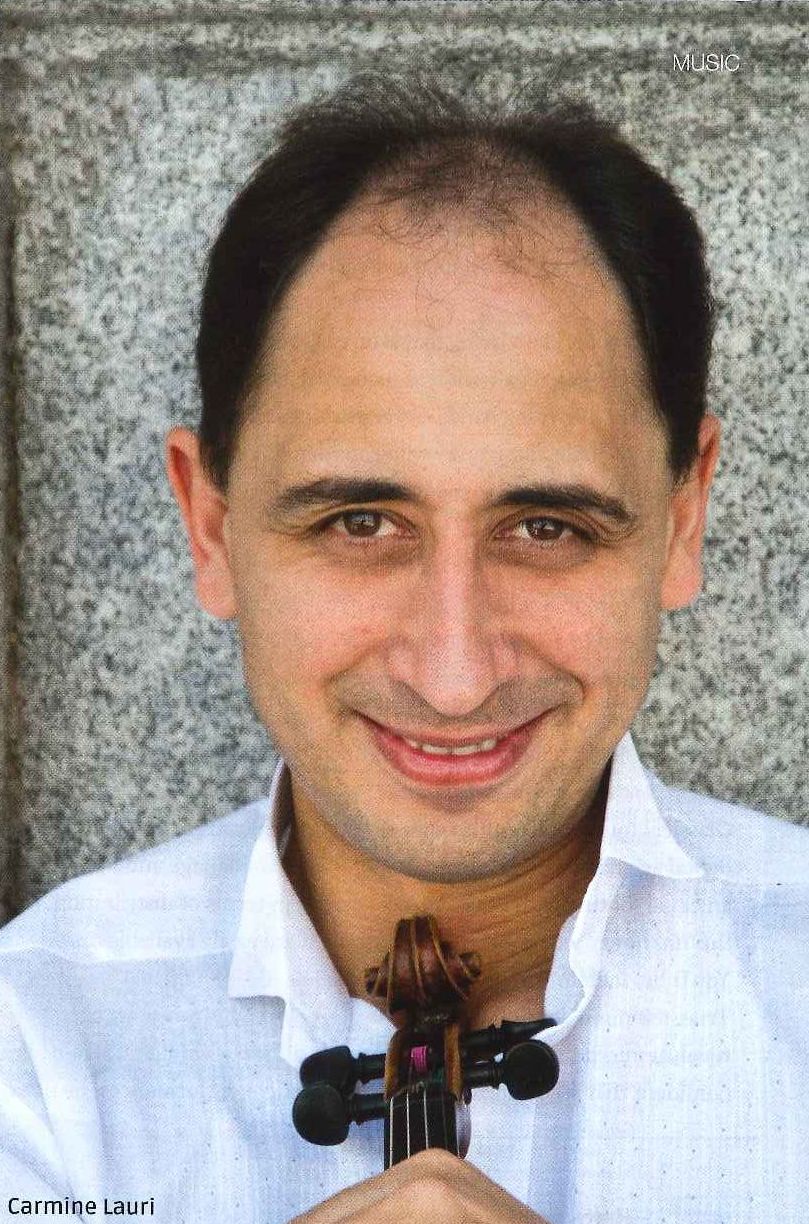 Carmine Lauri needs very little introduction. He is one of the top Maltese musicians of his generation, a violinist who performs regularly with some of the best orchestras around, and a consummate artist whose performances have received great acclaim. But perhaps Carmine Lauri’s best quality is his humanity.

Even though he has years of music making behind him and has made a name for himself abroad, he remains wonderfully down-to-earth. Despite all those years of working in the highest echelons of music-making, he has maintained a fresh approach to music.

People sometimes struggle to understand what the life of a musician is like. True, the thrill and magic of the stage forms an important part of it, but it is a life of great sacrifices. Very often, one is constantly on the go, and has to adapt quickly and constantly to different environments. ‘I lead a very hectic lifestyle, and what I look forward to most is time out at home.’

Being an orchestra leader also has its pressures, and its rewards. An orchestra leader is an important point of reference for the whole orchestra, and a vital connection with the conductor. There is a great responsibility not just on a musical level but also on a human level. On top of that, it’s the orchestra leader who gets all the important (and difficult) violin solos in a piece. It is no easy task, but Lauri is the perfect man for the job, with his blend of musicality, common sense, and a sense of humour.

‘To err is human,’ it has been said. Watching an artist perform on stage can sometimes make us forget that deep down these are human beings like us, and that occasionally things can go wrong. ‘Do things ever go wrong?’ I ask Carmine Lauri. He’s at a loss from where to begin.

‘A fairly recent one was actually my fault. During a performance of Stravinsky’s Petrushka with the LSO and Valery Ghiergiev, I happened to be sitting as co-leader on the front desk and during the concert I accidentally turned two pages at once for my colleague who was leading, and we both came in crashing playing loudly for a few bars while the rest of the orchestra were playing simple pizzicato notes!’

There was also the time he was playing Dvorak’s Symphony No. 6 with the LSO, under Sir Colin Davis’ direction, and he was playing on a Stradivari violin he had just borrowed for a few years. Carmine Lauri got somewhat over-enthusiastic, and the E-string snapped halfway through the performance. Of course, it wasn’t the first time he had changed a violin string mid-performance, but in his haste the peg flew out of the violin neck and landed somewhere in the flowers in front of him. Between frantically searching for the peg, and holding on to the Stradivarius like his life depended on it, he missed the entire first section of the symphony.

Sometimes keeping your playing fresh is extremely difficult. Just think of the poor folks at the Vienna Philharmonic who every year have to play The Blue Danube and the Radetzky March for the New Year’s Day concert. I get nauseated just by watching 10 seconds of it, let alone having to play it every single year. ‘I would not have lasted long in my career if every time I played a Brahms symphony I always played the same fingerings and bowings year after year,’ says Lauri.

So how does he approach a work like Vivaldi’s The Four Seasons, ostensibly one of the most performed works in the classical canon? Carmine Lauri will be performing it in Malta on the 27th of March, and I’m curious how he prepares for such a concert. ‘So many interpretations have been presented to the worldwide public, some rather eccentric and I try to find a fair balance whenever I perform them.’ says Lauri. ‘I am not one to experiment to such an extent that I end up destroying what was originally written, and am not too much in favour of such interpretations.’ For Lauri, it’s about finding the right balance between respecting the original and giving it a new lease of life.

With a composer like Vivaldi, that is no easy task. Vivaldi’s music makes great use of repeated patterns and sequential passages, and can very easily sound dull in the wrong hands. Several critics and musicians have had a go at Vivaldi, including Stravinsky who considered him a ‘a dull fellow who could compose the same form so many times over’. Lauri begs to differ. He believes that Vivaldi has a lot to offer, and I would tend to agree with him.

However, composers like Vivaldi, or even specific works like The Four Seasons, tend to eclipse a vast and sadly neglected repertoire. How many of us have heard Cesar Franck’s Symphony in D minor? Or even Ibert’s Escales? Carmine Lauri also singles out Suk’s Asrael Symphony, a work which Lauri considers ‘one of the most difficult’ he has ever performed.

Classical music is going through an interesting transformation. The digital age has made the dissemination of classical music easier to manage, and has put it on an equal footing with other musical genres in terms of distribution. All the ‘unknown’ works Lauri has mentioned are easily available on YouTube, therefore all you need to do is just log on and click away. There is also a broader definition of classical music, and composers and musicians alike have embraced this diversity. ‘Classical music will always have a future,’ asserts Lauri confidently. ‘It’s rich, it’s a treasure, it’s probably the most understood languages without words.’

True, the rapid developments in music recording technology has revolutionised the way we experience music, and although Carmine Lauri is confident that recordings can never replace live performances, he does have a little music tech confession to make. ‘I have a very strange passion that started since before I could even walk and that’s for reel to reel tape recorders’ confesses Lauri. ‘I have a fascination for them and have collected quite a few of them, some very professional ones and some very vintage and am surrounded by all sorts of different brands of tape at home, probably have around 500 reels of tape and around 11 tape machines.’

His interest is not a simple fascination with old machines, but a very active involvement in his hobby. Carmine Lauri often does all the repairs himself, which is both admirable given that classical musicians are not usually associated with music technology, and also rather ironic given that he was then defeated by an 18th century Stradivarius peg mid-performance.

Carmine Lauri is strong advocate of keeping an active healthy mind, and is suspicious of
our dependence on social media. For him, whether he is at work or relaxing at home, keeping mentally active is extremely important. Lauri is therefore honoured and proud to be performing as part of the University of Malta’s  Brain Awareness Campaign. His upcoming Malta engagement is in fact organised by the Research, Innovation and Development Trust (RIDT) within the University, and it is a fundraising concert to help with research funding in mental health issues.

Carmine Lauri plays ‘The Four Seasons’ will be held on Sunday 27th March at 19:30 at St Publius Parish Church Floriana. This concert is supported by APS Bank, ADRC Trust and Studio 7, and all proceeds will go towards brain research, within the UoM. Tickets and further info can be obtained from St James Cavalier, Spazju Kreattiv on 21223200 or click here to purchase online.

The Four Seasons for Brain research

By RIDT in Blog, Supporting Research on March 2016