The Ride Of Their Lives

The Ride Of Their Lives

Still fresh from a seven day cycling challenge through a number of European countries for charity, Nicky Camilleri, the chairperson and co-founder of the ALIVE Charity Foundation, tells us how it all started, how far it’s come, and the sacrifice behind getting there. 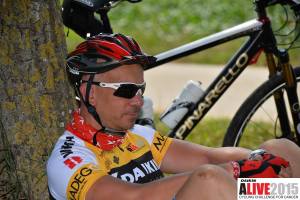 Every year, a team of cyclists commit themselves to 16 weeks of training to increase endurance and stamina in preparation for the cycling challenge, which is normally organised at the beginning of July. Participating is no leisure, and one must be fully prepared for a physically- and mentally-tough challenge across several European countries in any weather condition. Cycling over 1000km to reach their designated end point, they are united in one aim: to raise as much money as they can for cancer research.

This formula has proven to be a very successful one and, in just two and half years, they’ll have raised over a quarter of a million. With that in mind it’s hard to believe that the ALIVE Charity Foundation is, technically, still a relatively new kid on the block.

“The idea for ALIVE first came about while I was cycling with Miriam during one of the weekly leisure rides organised by South Cranks, Malta’s largest cycling group with over 400 members.

“I remember it was just a few days after my birthday and we joked about getting older. I told her I felt that it was time I did

something with my life to give something back to the community,” he continues. “I’m quite the workaholic, you see, but I wanted to do something that made a difference. At that point, however, all we knew was that we wanted to do a cycling charity event on a large scale and that it had to be overseas to be successful. The what, how and where were still blurry”… explains Nicky Camilleri, the chairperson and co-founder of the Charity and one of its most avid cyclists. 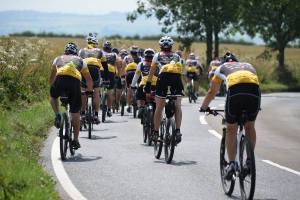 “We were so enthusiastic that it took less than a week for Miriam to rope in three other cycling buddies, Elton,
Gerth and Lydia, who, along with Miriam and myself, are the three other co-founders of ALIVE. It was Christmastime, I remember, but we were so determined that, in a matter of weeks, we set up an NGO and, in January 2013, ALIVE was launched as a Charity Foundation.

For Nicky this was a dream come true and something that would revolutionise his life, particularly because the reason
behind the charity is a personal one: “17 years ago I watched my mother succumbing to cancer,” he explains. “Since then, I’ve lost a good percentage of my extended family to the illness, too. It’s a terrible disease and it’s made me realise that prevention is better than cure and that research is just as important as offering support to those who are suffering.”

The first challenge – which saw 35 cyclists go from London to Paris through Brussels – was a complete success, with the funds raised in collaboration with Action for Breast Cancer Foundation going towards the Research Trust of the University of Malta (RIDT) to sustain a specialised programme in breast cancer research.
The second ALIVE Cycling Challenge for Cancer saw the two main breast cancer organisations in Malta working collaboratively with ALIVE towards this good cause. Action for Breast Cancer Foundation, as well as Europa Donna, saw
the need to team up and support ALIVE to raise more funds from the
community. So, as Nicky points out, “although we are a relatively budding foundation, we wanted to show the people out there that the

key to obtaining more positive results is by working collaboratively with other Maltese organisations. In fact, this year, since the funds are intended to go towards Children Cancer Research, ALIVE found collaboration from the Malta Community Chest Fund and Puttinu Cares.

Now, fresh from their third cycling challenge, the foundation has become renowned for its honorable work. But what most people don’t get to see or experience is the cyclists’ incredible journey from civilians to semi-professional cyclists who cross great distances in such a short time.

“Adrenaline plays a major role during these events,” says Nicky. “In fact, it was only when I broke my shoulder just six weeks before the last challenge that I learnt how others can feel when, after weeks and weeks of training, something goes wrong and you are down and in the backup van. Will power plays a very important part but I really need to thank God for recovering fast and doing the challenge once again.

“We do take some risks, of course, but we emphasise on the safety of the participants. There was one instance last year where we were called in by fire brigades to shelter due to low visibility, strong winds and heavy rain, and had to wait it out until it was safe enough to continue cycling.  Ultimately, our main challenge isn’t just to raise
funds, but to also get to our destination as one whole team.

“During the challenge, we all become one big family and, sometimes, we would even need to reduce our
average speed to support those who might have encountered an injury on the way or feel exhausted, and encourage them to make it to their next destination. After all, it’s important to remember that these people would have been through 16 weeks of arduous training, and they’ll have raised at least €2,200 for charity each – that’s a must to be able to participate,” he adds.

What’s most interesting about ALIVE is probably its name, which, as Nicky points out, was inspired by the following idea: ‘A: First we must LIVE then we’re Alive’.

“Many of us take a lot of things for granted, and we don’t take care of ourselves or our health,” he continues. “But, when we are hit with a sickness, we all wish we would have done things differently. That’s why the most important thing in life is to remember to live – and healthily at that!”

ALIVE Cycling Challenge for Cancer would not have been possible without the generosity of the sponsors and the Maltese community at large and together they have helped the Foundation raise thousands of euro for research. This year’s donation – “a record amount which we cannot divulge for now,” explains Nicky – will go towards children’s cancer research and you can read more about that here.

“We had approached Wilfred Kenely, the CEO of Research Trust (RIDT), as soon as we started working on ALIVE,” says Nicky. “Very few people know just how many breakthroughs are taking place in Malta every year and, since we started, educating the public on the importance of cancer research has been one of our biggest challenges. RIDT, however, is at the forefront of both doing that, as well as helping to fund it, and we’re proud to have worked together.”

Preparations are now well underway for the ALIVE2016 Cycling Challenge for Cancer, with the event being launched in the coming months and training commencing in March 2016. Anyone who wishes to join the team can contact ALIVE through their Facebook page.

For more information on the ALIVE Charity Foundation please visit their site or follow them on Facebook.

By RIDT in Blog, De Soldanis' Dictionary on August 2015

How a Bucket Changed the World

By RIDT in ALS Malta Foundation, Blog on August 2015