The Biobank – One of Malta’s Best Kept Secrets

The Biobank – One of Malta’s Best Kept Secrets

Since 1989, every child born in Malta has been tested for hereditary haemoglobin disorders in a project conducted jointly by the University of Malta and the Malta Health Department. Over time, and with the support of the Research Ethics Committee of the University, these samples gave rise to the Malta Biobank, a unique repository of samples and data. These are essential to understanding the genetics of the population of Malta and the causes of rare hereditary disease. Here, Joanna Vella, a Biobank Assistant, gives us a tour of the why and the how of this unique research facility.

Deep beneath the Biomedical Sciences Building on the campus of the University of Malta are two rooms guarded with alarms and locks. They are climate-controlled, and every measure – from extinguishers in case of a fire to intruder alarms – has been taken to ensure their security and safekeeping.

Together, these two rooms form Malta’s Biobank: a living catalogue of many samples of blood and DNA of people afflicted with various illnesses and conditions, including (type 2) Diabetes, Parkinson’s disease and Thalassaemia.

“The bank is made up of two arms,” explains Joanna Vella, who works alongside Professor Alex Felice, the founder and director of the Biobank.

“One part of it is the Population Biobank, which holds 30,000 samples of DNA from children born in Malta over the past 26 years; while the other, the Clinical Biobank, holds various collections of blood and DNA (totalling to 11,000 samples) of people who were diagnosed with particular illnesses.”

On the one hand, the Population Biobank is an exercise in collecting Maltese and Gozitan DNA, which can then be used by researchers in Malta and abroad to help them with any medical investigations they may embark on; “subject, of course, to informed consent,” she adds. They are also exploring the possibility of a ‘research co-operative’ of subjects who are willing to share samples and data in support of health research. This would help both Malta’s researchers and foreign ones; after all, there are important leads on the genetics of diabetes right here in Malta.

“As part of the National Thalassaemia Programme, when a child is born a cord blood sample is kept and tested for herditary haemoglobin diseases,” explains Joanna. “If anything is found, then the parents are notified and medical action is taken as necessary. If nothing is found, then that child’s blood becomes anonymised and is placed in the Biobank to create a catalogue of the Maltese population’s DNA.”

This process is one that has helped many families determine 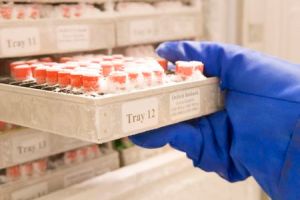 chronic or underlying diseases early on. In fact, the PhD research of Dr Joseph Borg, which led him to discover the KLF1 gene has its roots in the National Thalassaemia Programme.

This project, in fact, began when a family with persistent foetal haemoglobin was met in the Thalassaemia Clinic and followed up by Professor Felice’s research group, which Dr Borg had just joined as a graduate student and research assistant.

“The Clinical Bank, on the other hand, is a collection of blood gathered through particular research, and the samples Dr Borg collected are now stored here too, for example,” says Joanna.

In order to have a detailed account of the various samples of DNA available at the Clinical Bank, Joanna, along with the Director Professor Felice and other helpers, spent six months sorting it out.

“Each researcher had his own collection and, unless we knew what they had been researching, we had to figure out what the DNA had been used for,” explains Joanna. “Now we have a lab that is both diagnostic- and research-oriented, and have samples of people who suffer from coeliac disease and retinoblastoma, among others. This allows us and other researchers to determine causes, patterns and even cures for these diseases.”

Malta’s Biobank does not stand alone in its work, however, and it is now a partner in various international biobank networks.

“We have been part of the EuroBioBank since 2002. In fact, Malta was one of the founding members and partners of particular research that is taking place on rare diseases known as RD-Connect, an FP7 project that is now in its third year and delivers essential IT tools with standards of quality practice in biobanking.

“What this means is that we’re automatically involved in many projects and our work and our researchers’ work is visible. More than that, however, it means that our researchers have the possibility to use samples of DNA from other countries to help them in their research. Ultimately, that benefits everyone involved, including current and future generations of Maltese people,” Joanna concludes.

You can be a part of this fascinating world of research by helping many other researchers achieve their breakthroughs in all faculties at the University of Malta, including medicine, archaeology and technology. We also urge you to become an active participant in health research when asked. Please click here for more information on how to donate to research of this kind through the Research Trust (RIDT).

By RIDT in Blog, Cancer Research on June 2015