A team at the University of Malta is developing an interactive IT portal that could revolutionise how the general public participates in Biomedical and Genomic Research. Dr GILLIAN MARTIN and her team explains how Dwarna could mark a new frontier for technology and health-related research.

The Malta Biobank has a problem: most people think it’s a financial institution, some think it is a power bank, a blood bank, or even an energy drink.

The results of a recent research project establishing the public’s awareness of the biobank – which, for the record, stores biological samples for use by the research community – highlight that much of the general public remains unaware of the biobank’s existence, and what it does.

This disconnect has translated into a lack of understanding of how someone may become involved in the vital health research taking place thanks to the biobank’s samples, and how they may remain engaged in the process.

“Donors to the biobank currently hand over complete control of their samples to the researchers when they donate, with very limited involvement in the research process moving forward,” explains Dr Gillian Martin, a sociologist at the Centre for Molecular Medicine and Biobanking and the project’s proposer and coordinator. “Likewise, researchers and academics have minimal opportunity to stay in communication with that donor and keep them informed of the outcomes of any research that is carried out on their samples.”

Dr Martin and a team at the University of Malta – which includes computer scientist Dr Jean Paul Ebejer, and Research Support Officers Maria Desira, also a sociologist, and Nicholas Mamo, also a software programmer – is seeking to rectify this. Through developing an interactive IT interface between the research centre and the public, whereby research participants can track and affect how their individual samples in the biobank are used, Dr Martin hopes that the public will more fully utilise the biobank as a vital local resource for health research.

“The biobank was established in 1989 by Prof Alex Felice at the University of Malta and is the national node of the pan-European Biomedical research infrastructure BBMRI-ERIC. It is rooted within the Centre for Molecular Medicine and Biobanking at the University of Malta,” Dr Martin continues. “Over the last few decades people have become more empowered by the internet, as well as by new GDPR rules, and there is now a tendency for more control of their samples and personal data. The idea for ‘Dwarna’ – as the platform has been named – was first raised in June 2017 as a technological means to provide that interaction, enabling a closer collaboration between participants and researchers, and encouraging more people to donate to the biobank, regardless of their health, nationality or background.”

As one of the first IT portals of its kind in the world, Dwarna will also offer participants the chance to give or withhold their consent, via a click of a button, for their samples to be used in new research studies. However, offering users this dynamic consent, which involves the use of sensitive personal information via the web-based platform, all while maintaining their privacy and data security, posed a difficult IT challenge for the Dwarna team. The solution was found in the ultra-secure data ledger technology that is currently taking the world’s financial markets by storm: blockchain.

“The process for developing Dwarna has been very organic, since we first had to understand what we needed to create, before figuring out how to present the information on the web,” points out Dr Martin. Dr Ebejer goes on to explain that it has involved a very close collaboration between the IT and research sides of their team; “Through this close collaboration, we now have a fully-operational prototype, andwe project that theweb portal could be launched by March 2020.”

As a result of this meeting of Malta’s minds, once the platform is launched locally it may then have important implications. Since everyone and anyone is eligible to donate to the biobank, the portal may provide a unique opportunity for Malta-wide research exploring the causes and potential treatments for locally-prevalent diseases such as diabetes, asthma, thalassemia, colorectal cancer and ALS.

Since Dwarna marries both technology and research, it was also the ideal fit for the Vodafone Malta Foundation, which fully funded the project via RIDT. “Without funding, projects such as Dwarna simply couldn’t happen. Apart from purchasing the equipment required, often project coordinators are also full-time academics, and so others must be employed to get the job done,” highlights Dr Martin. “As well as the funding and support we received from Vodafone Malta Foundation, the project has also been realised with the support of the team at SWITCH who contributed their expertise in branding the platform, and the valuable support from the Centre for Molecular Medicine & Biobanking director Prof Richard Muscat. Dwarna is truly a collaboration of Malta’s experts from a variety of fields.”

Help us fund more projects like this, as well as research in all the faculties, by donating to the RIDT. 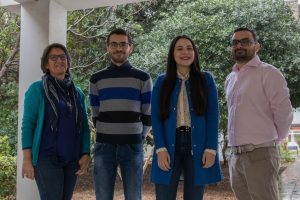 Striding Ahead in Stroke Research

Message by the CEO

By cyber in Newsletter on June 2019